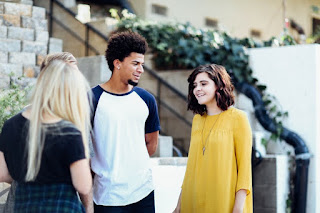 Just recently, I was having this irresistible urge to address the issues surrounding Feminism and being a Feminist. I feel a lot of things have gone wrong and a lot of people are getting it all wrong. Just last month I saw a post on my Facebook wall were some people expressed their opinions on why they don’t need to be Feminists, why they don’t like Feminists, and why they feel Women should support themselves rather than stand for gender equality. Well, I’m not against what they stand for neither am I against Women supporting Women.

Y’all know I celebrate Women and stand for their empowerment any day, any time. But why should anyone hate Feminists? I get the fact that most people now over use the word or associate it with some kind of belief system which should not be. I get the fact that there is so much toxicity around the word and the modern day Feminism. I also get the fact that you don’t need Feminism because you are not a weak Woman neither are you a Victim of what it stands for. But let me first school you on what this is all about.

So, who is a Feminist? What does a Feminist believe in? What are their core beliefs? What is Feminism? How did Feminism begin? And What is Feminism not? A Feminist is someone who believes in equality between the genders. They believe that both men and women should have equal opportunities.

Whilst some people may find the idea of Feminism a redundant one, personally, I feel that this is a very exciting time in the gender equality movement. By definition, the term Feminism means the advocacy of Women’s rights on the grounds of political, social, and economic equality to Men. – Emma Watson.

A Feminist activism is the struggle for that equality among us, they strongly believe in seeking to establish equal opportunities for Women in education and employment. Their core beliefs is that Sexism exists, Sexism against Women (misogyny) is enduring, pervasive, systematic, cultural, and ingrained. They also believe Women are intellectual equals and social equals to Men, and that Women should be recognized and treated as equals to Men.

Feminism is normally and originally used to describe a political, cultural or economic movement aimed at establishing equal rights and legal protection for women. It started as a range of political and social movement back then in America in order to establish equal opportunities for women in education and employment because the American government paid less attention to women when giving employment opportunities.

It is customary to divide the history of Feminism into a First, Second, and Third Wave. But organized Feminism did not really kick off until the first Women’s Conference held in Seneca Falls, America, in 1848 allied with the Labour Party. To begin with, the Women’s movement evolved out of social reform and campaign groups such as the Abolition of Slavery, the Social Purity and Temperance movements thereby leading to a Feminist movement in the 19th and early 20th century.

I know there has been a lot of confusion about it lately, I also know people now use the word wrongly, associating it with some kind of belief system, self pity for Women or making it seem like Women should be given some kind of mystical powers over Men but that shouldn’t be a justification to hate Feminists.

We must remember that some Women started this movement to help vulnerable Women back then, they fought so hard for this. It took 70 years for Women to get voting rights, some even gave their lives for it and in many countries it is still being fought for. And yes despite all the fight for equality, today Women are still paid 23% less than Men for the same work in some countries, many Women world wide continue to be challenged about it, others are still denied of their reproductive rights, and 1 in 5 Women are sexually assaulted in gender based violence or domestic violence.

Men were dominant so Feminism came about in order to equal the score. So, imagine if there were no Feminist movement at all, it would have been worse. But it is not for us to give up, it is for us to continually do our best in any little given opportunity to speak out and stand for what should be.

If the first woman God ever made was strong enough to turn the world upside down all alone, together women ought to be able to turn it right side up again. – Sojourner Truth

We should all be Feminists. – Chimamanda Ngozi Adichie

I was shocked when I met a guy last week who sadly feels the term ‘Feminism’ seems to isolate Men and give Women power to rule the world. Feminism is not just about equality, neither does it mean Women are superior. It does not have negative views of Men. And yes, generally speaking, even liberal minded, educated, exposed, and relatively evolved men still cringe at the mere mention of it.

But Hey, I’m a Feminist and I support Feminism because I believe Women should be given equal rights and opportunities in education and employment the same way it’s being given to Men.

Hey, I’m a Feminist and I support Gender Equality and not exercising dominion over Men.

Hey, I’m a Feminist and damn no I’m not a Man hater or Anti-Men.

Hey, I’m a Feminist and I believe Men should also share in the Feminist ideology of Gender Equality.

Hey, I’m a Feminist and I do not feel less of myself compared to a Man.

Hey, I’m a Feminist and it’s not just because I’m a Christian.

Hey, I’m a Feminist and I believe empowering women is one of the most beneficial ways for a country to achieve peace and prosperity.

Hey, I’m a Feminist and I love, support, and celebrate every Woman out there.

Hey, I’m a Feminist and I believe in it’s continuous movement

What do you think? I love to read your opinions and thoughts!

Matilda Adams: A Blend of Beauty, Character, Brains, and Grace.