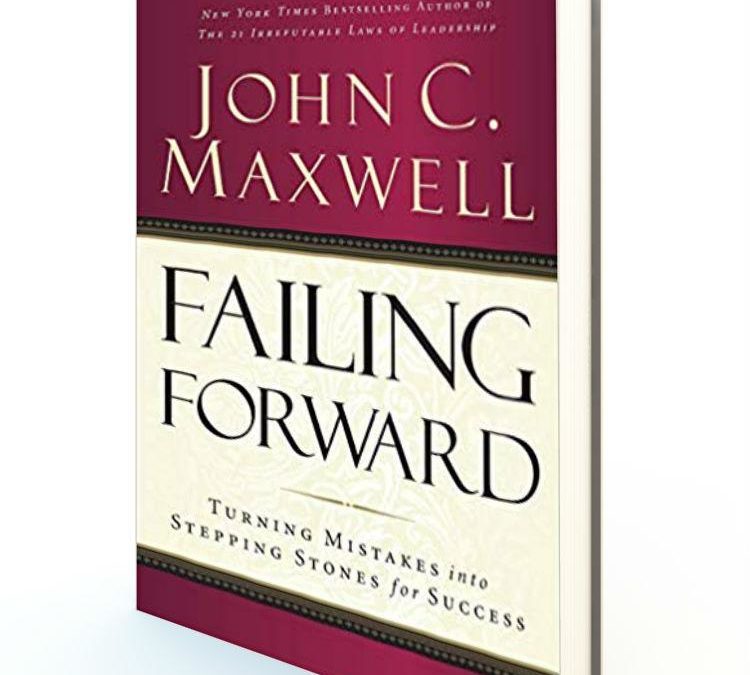 My first encounter with this book was in October last year when my boss recommended it for me because of the many questions that clouded my mind as at then; I wasn’t feeling perfect enough for my current position at the office even though I knew I was qualified for it.

I was also working on several projects totally different from what I studied in school and I really needed to be assured I was on the right path even though I knew within me I was. You see, this feelings thing ain’t no good at all because if you live your life based on how you feel, you will never get anything done in life.

Well, I later got to study the book and I was wowed by the depth of its pages, it inspired me so much that I even had to turn it into a daily devotional for personal purposes. Inside the pages of this book, I learned what they never taught me in school and I also saw practical ways of turning my mistakes into stepping stones. Here is my review of the book.

Failing Forward was written and published in the year 2000 by the popular leadership expert, speaker, pastor, coach, best selling American author, and one of my favorite authors, John C. Maxwell.

He took a closer look at failure and reveals that the secret of moving beyond failure is to use it as a lesson and as a stepping stone. Life is somewhat filled with trials and errors which he said, it’s a necessary part of growth, and in order to walk the path of success, you may have to make some wrong turns along the way.

“There are many ways to be a winner but there is only one way to be a loser and that is to fail and not look beyond the failure”. -Kylie Rote Jr.

He stated the main difference between people who achieve and people who are average? What makes achievers excel? Why do some people skyrocket while some plummet? What makes the difference? The answer to this question is simple; the difference is their perception of and response to failure said John C. Maxwell which is actually so true. Failure isn’t a percentage or a test, it’s not a single event, it’s a process and there are no achievements without it.

So what is failure not? Or how should you define failure?

And because of that fear, it limited my professionalism at the job and I could vividly remember my instructor yelling at me and asking me what’s wrong? Why are you acting like this? To cut the long story short, when I got back home that day, I felt so bad that I felt I was a failure because I didn’t put in my best performance but I also remembered thinking about everything later that night, looking at where I erred, my mistakes, then learning from it and moving on. And the next event I had to cover, I walked in with much confidence and performed excellently better than the last job I did.

So what if I had given up? Or judged myself as a failure from that one time experience? Or considered it as a stigma to be lived with? I probably won’t have had the courage to cover another event.

Therefore, each one of us has to make a choice. Are we going to sleep life away, avoiding failure at all costs? Or are we going to wake up and realize this: Failure is simply a price we pay to achieve success. If we learn to embrace that new definition of failure, then we are free to start moving ahead and failing forward.

“Many of life’s failures are people who did not realize how close they were to success when they gave up.” -Thomas Edison

In this book, John C. Maxwell stated seven abilities needed to fail forward which I will just highlight here;

1. Reject Rejection: Achievers do not label themselves as failures rather they keep the right perspective, they take responsibility for their actions and do not take failure personally.

2. See Failure as Temporary: People who personalize failure see a problem as a whole they are permanently stuck in. But achievers see any predicament as temporary.

3. See Failures as Isolated Incidents: When achievers fail, they see it as a momentary event, not a lifelong epidemic. It’s not personal. If you want to succeed, don’t let any single incidence color your view of yourself.

4. Keep Expectations Realistic: If you want to take a stroll in your neighborhood, you can reasonably expect to have a few, if any, problems. But that’s not the case if you intend to climb Mount Everest. It takes time, effort, and the ability to overcome setbacks. Keep hope alive but approach each day with reasonable expectations and do not get yourself hurt when things don’t turn out perfectly.

5. Focus on Strength: What distinguishes winners from losers is that winners concentrate at all times on what they can do, not on what they can’t do. Develop and maximize your strengths.

6. Vary Approaches to Achievement: Achievers are willing to vary their approaches to problems, they keep trying and changing until they have found something that worked for them. That’s important in every walk of life, not just business.

7. Achievers Bounce Back: All achievers have in common the ability to bounce back after an error, mistake, or failure. It’s always great to figure out what you didn’t do right, so you don’t do it again. That’s the key to bouncing back.

I highly recommend this book to anyone striving to succeed despite all odds, it can also be applied to your entire life and not just one part of it.

I do hope you enjoyed this month’s book review as much as I did while studying the book? Kindly share your thoughts with me and other readers as I look forward to the next book review with you all.

P.S – You can also check out my previous book reviews using the label Book Reviews on the blog. See you next time!

How Visualization Can Help You Achieve Your Dreams

How to Read Books When You Don’t Feel Like Reading

15 Books I Read That Changed Me

Book Review || The Monk Who Sold His Ferrari By Robin Sharma