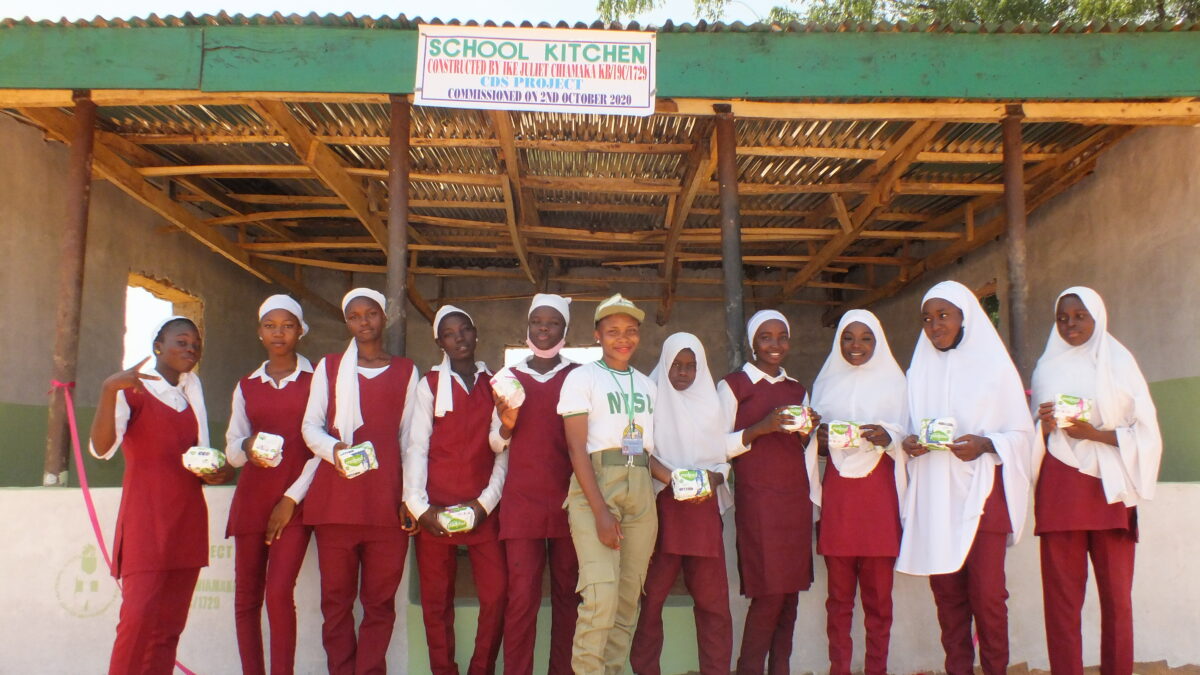 Juliet Ike: How I Executed My NYSC Personal CDS Project

Juliet Ike Chiamaka is a National youth-serving corp (NYSC) member at Birnin, Kebbi State of Nigeria. She recently completed and commissioned her Personal Community Development (CDS) Projects in a Government secondary school in Kebbi State. Her projects include;

1. Construction of permanent kitchen blocks for the school.
2. Distribution of foot wares to students of the school.
3. Sensitization of female students on the Girl child and the importance of personal hygiene as well as the distribution of sanitary pads to some of the students.

In her words, she wrote;

One of my major goals for my NYSC service year was to embark on a Personal Community Development Service Project. When I was deployed to serve in Kebbi, I was not happy and for days I was almost depressed because I have not been to the North before and I couldn’t imagine being without my family for such a long distance.

While leaving for the NYSC Orientation camp, I had planned on working my redeployment, but as they say; man proposes but God disposes. The story changed. At the orientation camp, I began to see sense in what I felt was not important, and eventually, I was sent to my Place of Primary Assignment (PPA) which happened to be a school.

Related: How I Donated 50 Desks for School Students Sitting on the Floor

At my arrival, the first thing I sighted in the school were students walking on “bathroom slippers” and some walked barefooted. Immediately, it struck a chord in me and I made up my mind to change the narrative by giving footwears to as many as I can.

As days went by, I began to realize that there were more problems and challenges faced by the students in the school where I was posted to serve and the schools nearby. Some ranged from the demolition of the school kitchen by heavy rainfall, which was badly constructed with zinc and wood. Another was the negligence of parents in paying more attention to the Girl child on personal development, health, and hygiene.

In extreme cases, I realized that some of these students usually shy away from simple healthy hygienes and total care for the body, especially the female menstrual process. Some who couldn’t afford sanitary pads in extreme cases used napkins which in most cases are not healthy for them; I have been there before so I understood their plight.

Out of my zealousness in solving some of these problems, I decided to embark on these three major causes identified in the school as my NYSC (CDS) project despite the fact that it was not easy raising funds for the purposes (especially due to the pandemic), yet I was able to pull through.

Presently, I have been able to execute the three major projects and commissioned them in the school and I am so grateful to God for giving me the opportunity to be a blessing to my Host Community and Kebbi State as a whole.

Career Boosters: 3 Side Hustles College Students Can Do to Improve Their Resume

How To Get The Best From Being a Student

Deborah Sarki: My Drive To Improve and Learn Everyday Shaped My Becoming Process

Chukwuemeka Amadi: See Yourself As A Product That Requires Continuous Development

We Are All One: Working Towards A Peaceful World